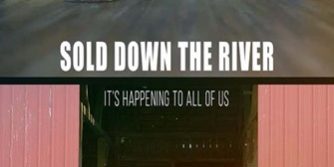 “SOLD DOWN THE RIVER”

Please join us for an in person and virtual showing of “SOLD DOWN THE RIVER” – a short documentary film directed by Karen Erbach Lawlor on Sunday March 27th, 3 pm, at The Kress Pavilion, Egg Harbor. A Q&A session with Lynn and Nancy Utesch, Kewaunee Cares will follow. Zoom Link:

About “Sold Down the River”

In the state of Wisconsin, and here in Door and Kewaunee Counties, third world water conditions have become an epidemic, brought on by factory farms and big agribusiness. Legislators seem to put the interests of their corporate donors over the health and safety concerns of their constituents and they continue to support bills that protect big business and polluters. This disturbing trend has been happening across the United States.

Director Karen Erbach Lawlor received her B.A. in film from Columbia College, Chicago, and then attended the American Film Institute as a directing fellow. Erbach Lawlor has produced two screenplays – “For Hire,” a feature film starring Rob Lowe and Joe Mantegna and “Mask of Fear” for ABC Television, MGM/UA. She was a top ten finalist in the Walt Disney Writing Fellowship Competition for her screenplay, “The Scapegoat,” which was also a finalist in the Austin Film Festival. “3400 Milles” is currently under option. As a director, she has received the CINE Golden Eagle Award for her short, dramatic film, “Lisa,” shot by Academy Award winner, Janusz Kaminski, which aired on PBS. She also received the Special Merit Award at the Illinois Film Festival for her short film, “In Bed.”