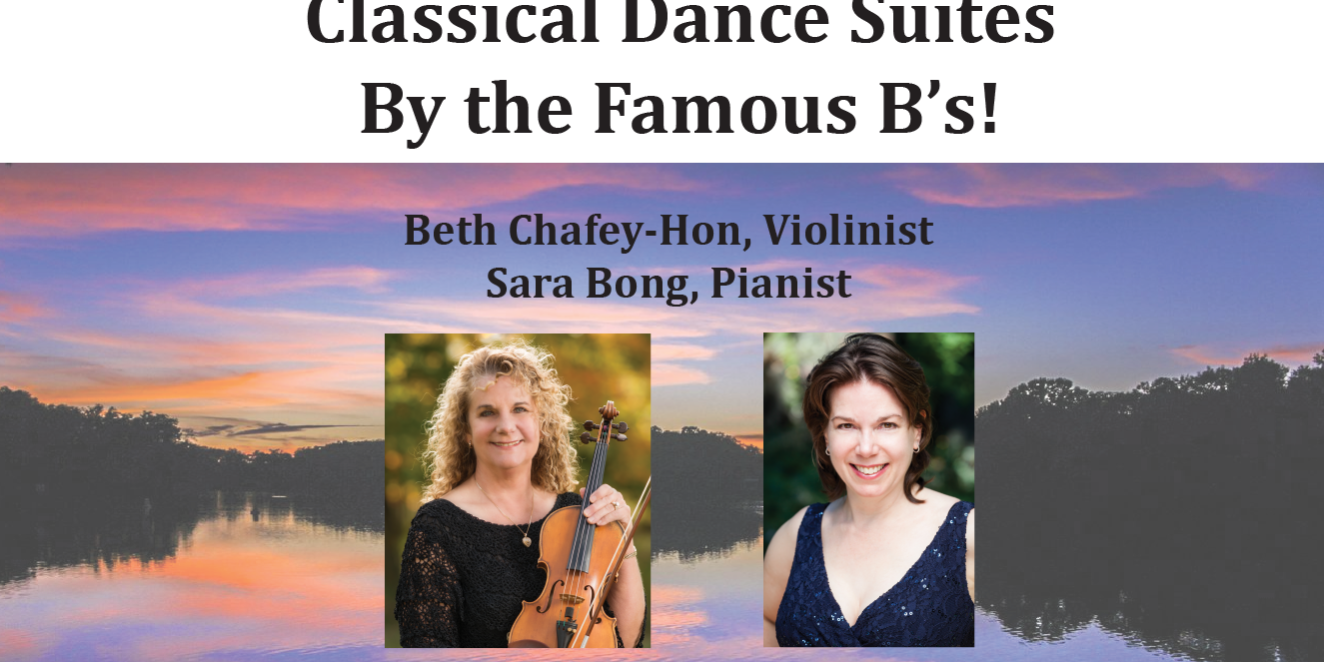 “Classical Dance Suites by the Famous B’s!” at the Kress Pavilion on Friday, November 9

Kress Pavilion will host a lively classical concert with selections from early Baroque through to the Present, featuring two woman composers, including Amy Beach, Byrd, Bach, and Bartok in the Great Hall.  Beth Chafey-Hon, violinist, violist and composer and collaborator/pianist, Sara Bong, make their Door County debut as a duo in “Classical Dance Suites by the Famous B’s!” performing with added percussion, multimedia displays and ballet with young students from Andria’s Dancin’ On the Door studio in Egg Harbor.

Beth Chafey-Hon, composer/arranger and violinist/violist, has performed concerts for over 40 years and has a beautifully expressive way of playing her music. Originally from El Cajon, CA she moved to Wisconsin in 2001, where she finally earned her Violin Performance Bachelor’s degrees at UW Oshkosh. She’s written and published many scores, is a member of A.S.C.A.P. (American Society of Composers, Authors, and Publishers) writes music poly-stylistic from avant-garde to quite consonant and tonal. She has released 3 CDs, “Textured Violin,” “World on a String” and “Textured Violin Classix #2” and is working on her “Desert Song Cycle”.  Each of the pieces is devoted to portraying various aspects of the desert wilderness, as in her last multimedia performance for the Anza Borrego Foundation, now she is adding a few songs for the wilderness and history of Door County, WI. for release this coming winter of 2018. Also in the works is “A Serenata” a CD of Violin and Harp, with Tamara Kazmierczak on harp, of exquisite romantic and light classical music.

Beth’s greatest love is giving back to her community through her music.  She has given many benefit concerts throughout Door County, all funds collected from donations at concerts going to many special causes, and looks forward to supporting the new Kress Library in Egg Harbor.

Sara Bong has enjoyed a long and varied career both on stage and “behind the scenes”.  As Vice President/Director of Program Development for MidAmerica Productions in New York City for over 25 years, she was responsible for the creation and administration of hundreds of events at Carnegie Hall, Lincoln Center, and numerous venues abroad.

As a pianist, Sara has appeared extensively as a soloist and collaborative musician. She made her Carnegie Hall debut at the age of 16, performing by invitation alongside famed pianist Eugene List in a Steinway-sponsored “Monster Concert” on May 2, 1979.  She is an active member of the international music fraternity Sigma Alpha Iota, serving as director of SAI’s Inter-American Music Awards Composition Competition since 2006, and performer/accompanist locally and nationally. She received her B.M degree cum laude in Applied Piano on scholarship from the University of Wisconsin-Madison and the M.A. in Arts Administration from the University of Cincinnati College-Conservatory of Music (CCM). After nearly three decades in NYC, this Kenosha native is thrilled to call Door County home.  She is especially appreciative of the warm welcome she has received and has quickly become immersed in DC life, serving as organist/choir director for Sister Bay Moravian Church and organist at Holy Nativity Church (Jacksonport), accompanying students at Gibraltar and Southern Door schools, playing for special events, and teaching piano privately.

“Finding Your Center” Movement Class – Thursdays at 9am
October 1, 2020
Go to Top