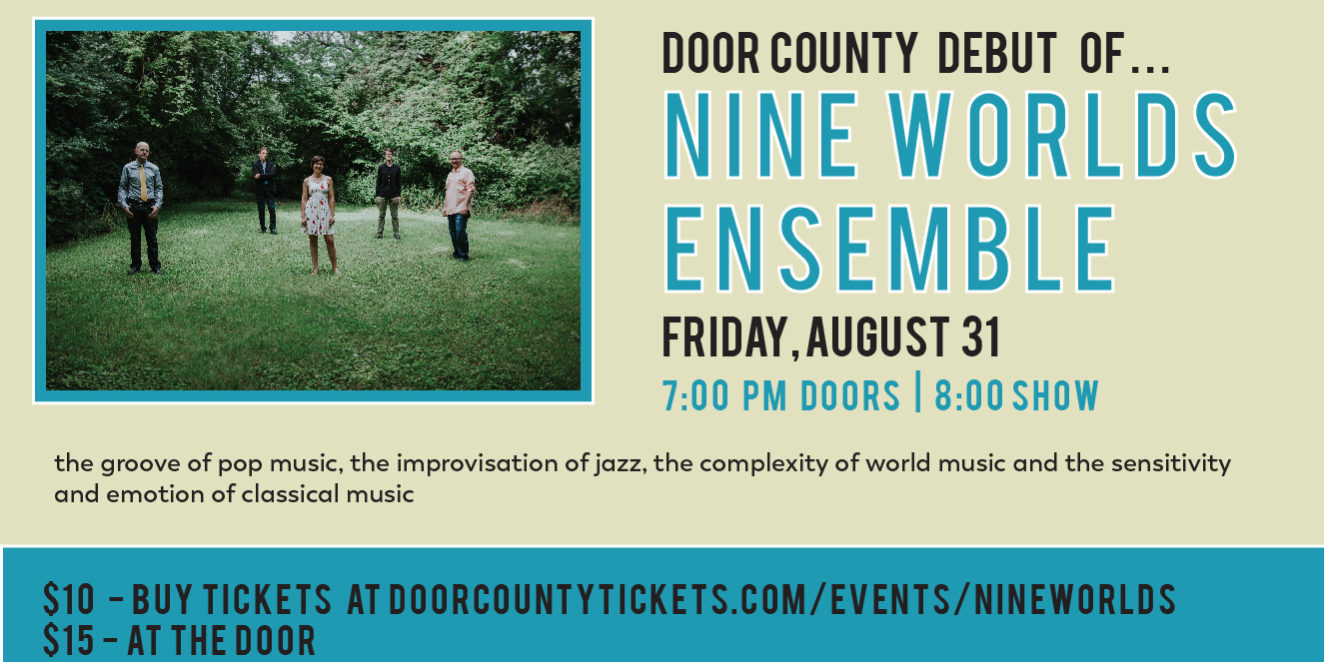 A blend of classical, jazz, pop with the complexity of world music
On Friday, August 31, the Kress Pavilion will host Chicago Based band, Nine Worlds Ensemble for a very special performance in the Great Hall.

Coming off a tour that included a stop at the Chicago Botanical Garden, Nine Worlds has backgrounds in classical, jazz, pop, rock and more. This diverse approach to music results in the groove of pop music, the improvisation of jazz, the complexity of world music and the sensitivity and emotion of classical music.

Thor composes and arranges the original music for Nine Worlds, organizes the band, books the performances, and plays marimba.  He received his B.A. in music at UW-Milwaukee, where he studied classical percussion.  When not performing with Nine Worlds, Thor can be found playing drum set and percussion with the Steve Edwards Orchestra, 1976, and Animal Farm, among others.  He has written for a wide variety of ensembles and has three albums under his name.  More information on Thor can be found at: www.thorbremer.com  Thor is also currently working on his MFA in Game Music and Audio.

Stephanie holds a Bachelor of Music degree from UW-Milwaukee. She performs regularly with Fretless Strings, Bowtime, Nine Worlds Ensemble, Animal Farm, Electric 5, and with various classical and wedding orchestras. She has played with such notables as the rock band Kansas, Peter Cetera from the rock group Chicago, Rod Stewart, Final Fantasy “Distant Worlds: Milwaukee” show, Doc Severinsen, Legend of Zelda:  Symphony of the Goddesses, and at Riot Fest with That Dog. Stephanie has recorded music for Milwaukee Public Television and for composers such as Thor Bremer, Luke Wieting, and Tammy Ann Winn.  Besides performing, Stephanie has completed SAA teacher training in Suzuki Violin Books 1-3 and enjoys teaching violin, viola, and piano at home and at The Music Suite in Naperville, IL.

About John Lewis:
Masters in Jazz Pedagogy, University of Miami, John is a full-time performing musician/ guitarist/ teacher, based in the Chicago area, and has performed extensively, coast to coast, across the country, and abroad. He`s appeared on the Oprah Show, at Presidential Inaugural Balls and at a number of iconic venues across Europe. He has published several compositions both as a songwriter and composer of contemporary instrumental music. Currently John is performing regularly with Guitarola, The Tom Fuller Band, and Nine Worlds Ensemble, teaching, and freelancing with various organizations in the Chicago area.

Ian became part of Nine Worlds after spending many hours with Thor discussing art and brainstorming various collaborations. He is a keyboardist, songwriter, music educator, and a conservatory-trained pianist that turned to indie rock and orchestral pop bands in the 2000s. Ian’s work in education has focused on developing rock/pop pedagogy; creating curriculum in songwriting, recording, and music business; and advocating for the value of rock/pop genres in all music classrooms. He is the Program Manager of Adult and Teen Music at Old Town School of Folk Music.  Ian also holds a master’s in Arts Management from Columbia College Chicago in addition to being an adjunct faculty member there.

Oliver is the newest member of Nine Worlds.  When he’s not performing with us, Oliver can be heard with a variety of local groups, or on the stage under the smoky lights at the Green Mill.  Oliver also teaches bass and guitar at the Rock House, Flatts, and Sharpe Music Company.  Oliver is a graduate of Knox College with a degree in Music Performance where he entered as a soccer player and tap dancer.

“Finding Your Center” Movement Class – Thursdays at 9am
October 1, 2020
Go to Top